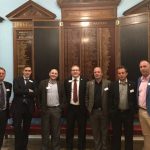 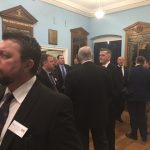 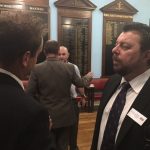 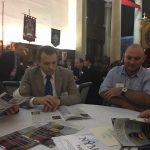 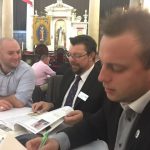 Five delegates of the Holywell Club from Sussex took part in fantastic visit to Bath, Somerset, on 1st October 2016, for the New and Young Freemasons’ Club’s (NYMC) conference.

The Holywell Club were present and represented New and Young Masons in Sussex. We had great discussions and shared many experiences and opinions.

Topics of discussion were wider Issues affecting New & Young Masons in Lodge: What is important, what really matters and what is of most interest?

We were treated by the presence of not one, but two Provincial Grand Masters in attendance. RW Bro. Stuart Hadler, of Somerset and RW Bro. Gareth Jones, South Wales.

The subject of communication and awareness was discussed and a suggestion to mention the New and Young Mason clubs on the second rising with Provincial Correspondence at every Lodge meeting and the date of the Socials and main events the clubs are putting on. Simple to implement and every member will hear the information.

A key note talk entitled “Wither directing our course” was given by RW Brother Gareth Jones, 3rd Grand Principal and Provincial Grand Master for South Wales. He spoke of his involvement with the Membership Focus Group and Improvement Delivery Group and the assembled Brethren were able to ask questions and explore ideas with this very experienced Freemason.

Our very own W Bro Nick Turner was chosen to chair one of the discussion groups, an honour in itself.

We had guided tours of the ancient Masonic hall that was once a theatre and a Catholic Church with a look at the burial catacombes and WW 2 damage.

Part of the discussions resulted in a centralised NYMC website which is being developed as I write this short report. The Holywell Club of Sussex will be members of this new site.

Special thanks to the Adair Club for hosting this years and we look forward to visiting the Rough Ashlar Club of Staffordshire for next year’s conference!

The Holywell Club of Sussex

For information on The Holywell Club of Sussex visit: